The story of the church is big enough. During the Byzantine period before 961 the seat of the archdiocese was in the church of St. Titus at Gortys. Then when Heraklion became the capital of the island built the new cathedral church where had been transferred the relics of the old church. In 1210, during the Venetian period, changes had been to the church, but it was destroyed in the early 15th century. The church was rebuilt in a new design but was destroyed in 1544 by fire. The temple was built for the second time again in the same rythm in 1557.

After the entry of Turks in the city the relics were rescued and taken to Venice, while the church was converted into a mosque dedicated to the Turkish conqueror of Heraklion, but was destroyed in 1856. In 1869 the building was constructed from the beginning and in 1925 it has returned to the Orthodox Christian worship. In 1966 the relics returned to the temple from Venice.

The church is celebrated on 25 of August. The vast paved square is a meeting point for locals and one of the most beautiful places in the city for walking.

You can visit the church of St. Titus through our tours Tour1 and Tour 3 and discover one of the greatest monuments of the city of Heraklion. 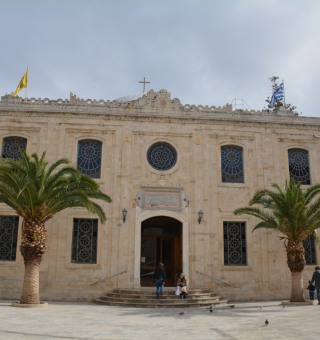