The archaeological site of Knossos is located 5 km southeast from the city center of Heraklion, is the center of the famous Minoan civilization and one of the most developed cities in ancient Greece.

One of the most popular tourist destinations with thousands of visitors from all over the world, making it an ideal choice for family-friendly excursions.

Several historians and writers such as Homer, Herodotus, Thucydides refer to Knossos, the palace and King Minos. According to archaeological and historical data, the historical course of Knossos began in 7000 BC with the first settlement in this area, in 1900 BC a large palace of 2,2 hectares was built, which was destroyed 200 years later due to a strong earthquake. Later, on this location was built one of the most magnificent palaces of world history. In 1600 BC another earthquake hit the area causing relatively minor damage, which was repaired quickly. The eruption of the volcano of Santorini in 1450 BC was the cause of the earthquake or tsunami that caused a huge catastrophe in the palace.

The Cretan archaeologist Minos Kalokerinos discovered the first findings from the palace of Knossos in 1878. After that, the Englishman Arthur Evans started excavations in 1900, which lasted 31 years and were expanded in the wider area of Knossos. Soon afterwards, Evans proceeded to the restoration of the palace with cement provoking a variety of reactions as some claim that this intervention alters the characteristics of the Minoan building, while others believe it would not be kept in good condition if there were no cement reinforcements.

The sure thing is that the children will be delighted with the enchanting myths associated with Knossos such as the story of Daedalus and Icarus, the Labyrinth of the terrible Minotaur, and the love story of Theseus and Ariadne. Parents will also love the practical application of original architectural and construction ideas, the frescoes, the variety of building materials and colored mortars. 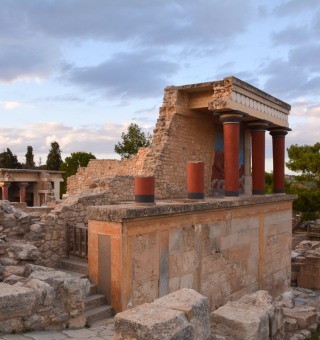